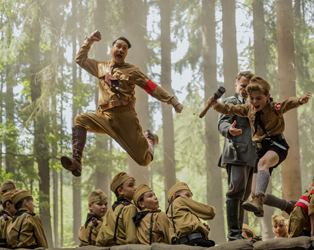 This film was released on 1st January 2020, and is no longer screening.

Ten-year-old Jojo Betzler (Golden Globe nominee Roman Griffin Davis) is a socially awkward, yet proud member of the Nazi Youth in the waning days of World War II. Having grown up during the Third Reich, Jojo has been brainwashed to believe Jews are the enemy, a view endorsed by his imaginary friend Adolf (director Taika Waititi), a cuddly, energetic, pep-talking version of the Führer. Jojo is outraged when he discovers that his mother (Scarlett Johansson) has been working with the resistance, helping to save the lives of Jewish people he has been taught to despise. A self-styled anti-hate satire, which savages the antisemitism of the Nazi era while identifying parallels with contemporary fascist groupthink, Jojo Rabbit, a companion piece to Waititi’s Hunt for the Wilderpeople, is a disarming delight which manages to balance weighty themes with a mischievous sense of humour.