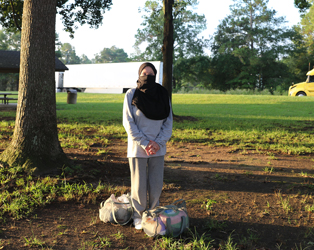 This film was released on the 14th of February 2020, and is no longer screening.

Troubled American Colleen LaRose immerses herself in online extremist activity, is radicalised, converts to Islam, and assumes the persona Jihad Jane in a bid to create a more empowered identity for herself. Her quest for meaning brings her to Europe where she connects with a cell of Waterford-based terrorists planning an attack on Swedish cartoonist Lars Vilks as punishment for his drawings of the Prophet Muhammad as a dog. Jihad Jane was arrested in March 2010 in a US sweep on the ‘new face on terror’, pleaded guilty and served a lengthy sentence.

Ciaran Cassidy’s fascinating film about a somewhat absurd terrorist cell explores the post-9/11 surge of anti-Islamic sentiment and the powerful allure of online fanaticism for impressionable and vulnerable men and women – a phenomenon which has played out dramatically on these shores in recent times.