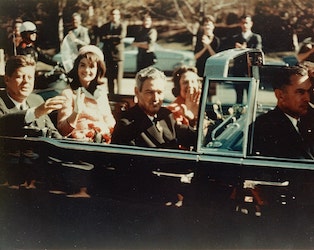 The director’s cut of Oliver Stone’s JFK will screen on December 4th. Tickets are now on sale here.

In this explosive documentary follow-up to his 1991 film, Oliver Stone takes viewers through recently declassified evidence and testimony in the assassination of President Kennedy, the most consequential American murder mystery of the twentieth century. Revisiting the scene of the crime Stone concentrates on some of the more widely debated issues around Kennedy’s death, such as the magic bullet theory, which, if assassin Lee Harvey Oswald acted alone, miraculously caused seven different wounds when it passed through the president and struct Texas Goerner John Connally. Joined by Oscar-winning narrators Whoopi Goldberg and Donald Sutherland, as well as a distinguished team of forensics, medical, and ballistics experts, Stone presents compelling evidence that in the Kennedy case ‘conspiracy theory’ is now ‘conspiracy fact’.