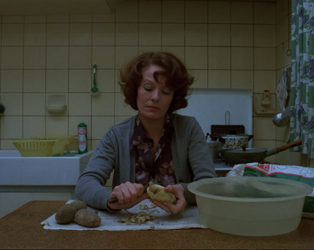 Acknowledged as a key figure in feminist filmmaking even during her lifetime, the work of Chantal Akerman has undergone constant reappraisal and re-evaluation since her tragic death by suicide in 2015, culminating in the recent voting of Jeanne Dielman as the greatest film ever made in the latest of Sight & Sound magazine’s decennial polls surveying critics and filmmakers on the subject. Starring Delphine Seyrig, this depiction of the quotidian existence of the title’s widowed housewife and mother follows her over the course of three largely uneventful days as she takes care of herself and her son’s prosaic needs and prostitutes herself for their financial needs. Filmed in static shots and in real time, the film offers an immersive experience of a woman’s perspective that before its release had seldom if ever been given such emphasis and cinematic and temporal space.