When a shark terrorises the resort of Amity, the search is on for the Great White Male to teach it that eating people is wrong. The three who set to sea are contrasting examples of flawed masculinity: a macho sea-dog (Robert Shaw); an upstart marine biologist (Richard Dreyfuss); and a Sheriff (Roy Scheider) out of his depth. The film’s narrative has elements of post-Watergate topicality (the political cover-up to protect the tourist trade) but then swerves into mythical adventure, with the shark a more accessible Moby Dick and not without a wicked sense of humour, particularly when it first pops to the surface to greet the Sheriff and give him the fright of his life. Benefiting from twisting underwater camerawork and the mechanistic rhythms and hungry groans of John Williams’ score to suggest the monster’s presence, Spielberg’s dazzling direction gives the first hint of his superstar potential: this is the most proficient manipulation of an audience’s primal fears since Psycho. (Notes by Neil Sinyard.)

The January 13th screening will be shown with a preview of Intruders as part of a Horrorthon double bill. 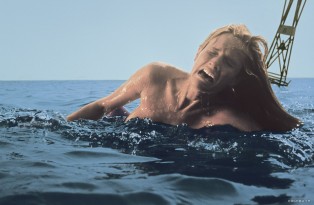