A Japanese salaryman, out for a drive with his girlfriend, runs over, and possibly kills a stranger, whom we later learn is a metal fetishist. Soon afterwards, the salaryman finds his body is being consumed by a disease that is changing him into a bizarre hybrid of man and scrap metal, and that the man he hit with his car is not dead and is somehow masterminding and orchestrating his rage and frustration-fuelled transformation. Tetsuo: The Iron Man fuses its heavy metal, cyber-surrealist aesthetic with body-horror imagery redolent of David Cronenberg at his most imaginative. The grungy, fetid atmosphere, retina-searing black and white photography and strong fetishist, sadomasochistic visuals make for a nightmarish yet intoxicating head-trip. 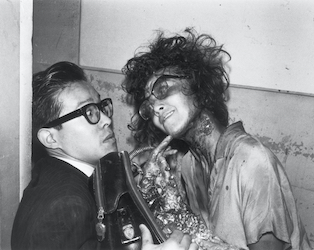