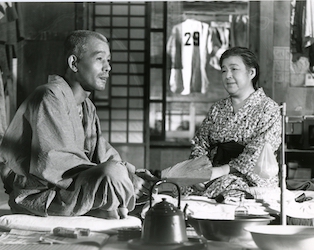 Considered one of the greatest of all filmmakers both at home and abroad, Yasujirô Ozu’s work is admired for its sensitive, compassionate depictions of inter-generational familial relationships and conflicts, while his innovative methods of visual and narrative storytelling have come to be hugely influential. In 2012, directors polled by Sight & Sound voted Tokyo Story the greatest film ever made. It sees an elderly couple all but shunned by their petulant children, who bloviate about their own concerns even as tragedy strikes. Ozu’s discreet directorial style places the emphasis on the dialogue and the nuanced performances of the performers, particularly Chishô Ryȗ and Chieko Higashiyama as the aged parents whose dignity stands in marked contrast to the younger generation’s insensitivity.