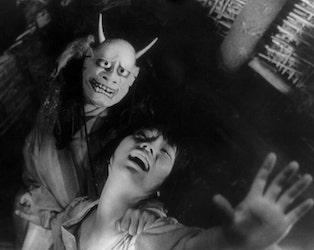 Deep within the lonely, windswept marshes of war-torn fourteenth-century Japan, an impoverished mother and her daughter-in-law eke out a desperate existence by murdering passing Samurai and selling their belongings. When a bedraggled young neighbour returns from the wars, he triggers an outburst of sexual tension and deadly jealousy. With crisp monochrome photography, a percussive soundtrack, and a claustrophobic atmosphere of impending doom, Kaneto Shindô’s cult classic is a surprisingly complex assault on gender and class politics. It’s also a terrific horror thriller – strange, stylised, and hypnotic. Shindô’s depiction of the wild landscape as menacing and uncanny, and the creeping paranoia of the traditional rural community nestled within it, lends Onibaba a distinctive reverberation of folk horror.