JAPANESE STORY: ONE CUT OF THE DEAD

One of the most inventive blends of horror and comedy of recent years starts with a bravura 37-minute take in which a film crew making a cheap zombie flick in an abandoned factory see their set invaded by real zombies. This unexpected turn of events occurs much to the delight of the director, who sees an opportunity to improve his film by incorporating this genuine mayhem and fear. However, this is just the opening act for the matryoshka-like structure of One Cut Of The Dead. To reveal the details of how events subsequently unfold would rob viewers of the opportunity to experience for themselves the mounting charm and humour of this paean to the highs and lows of low-budget filmmaking. 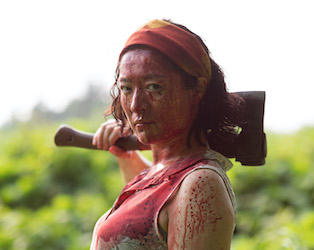