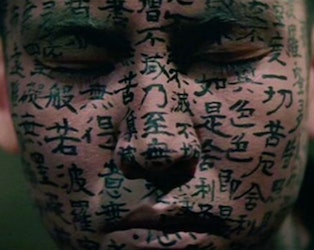 Working from a quartet of Irish-Greek writer Lafcadio Hearn’s Japanese folk tales, director Masaki Kobayashi created a spectacular, otherworldly portmanteau film wherein mortals battle forces beyond their comprehension. An impoverished swordsman leaves his devoted first wife for a woman of means in The Black Hair; two unsuspecting woodcutters take refuge from a snowstorm in a witch’s house in The Woman of the Snow; a young blind musician meets a grim fate in Hoichi the Earless; and a writer relates an uncanny tale in In a Cup of Tea. The exquisite hand-painted sets, luminous photography, lavish costumes, and the abstract, nerve-jangling score work in concert to achieve the singular atmosphere of the film.