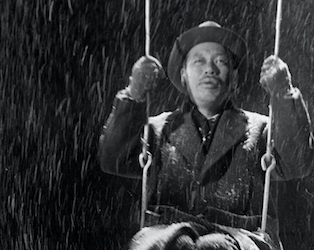 Akira Kurosawa will forever be associated with samurai action films, and the magnetic presence of Toshiro Mifune, an image so indelible that it has, sadly, overshadowed much of the director’s quieter, though equally memorable films. Completed after Rashomon and before Seven Samurai, Ikiru is his gentlest and most contemplative work; Ikiru means ‘to live’, and this warmly compassionate tale raises the question of what it means to live, and to die. On learning that he is terminally ill, civil servant Mr Watanabe (Takashi Shimura) resolves to bring some meaning to a life he feels has been wasted. Ikiru, which culminates with one of the most profoundly moving sequences in all cinema, is an enduring humanist masterpiece.