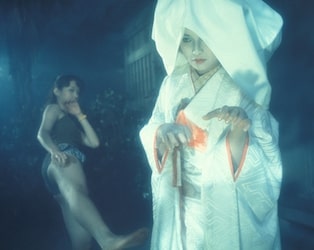 Director Nobuhiko Obayashi began his career in experimental shorts before making his feature debut with Hausu, a film that has attracted one of Japanese cinema’s greatest international cult followings. Upset at her father’s imminent remarriage, Gorgeous (Kimiko Ikegami) invites six friends, each of whom is also named after a defining characteristic, to accompany her on a visit to her aunt’s house. Unfortunately, the house is haunted by a vengeful spirit that attacks the girls. Many of the girls’ fates were suggested by the director’s pre-teen daughter, inspired by her own fears and nightmares. Presented in a surrealistically cheerful and colourful fashion, the film is a hallucinatory fairytale with a healthy dose of the absurd, making for a singular viewing experience.