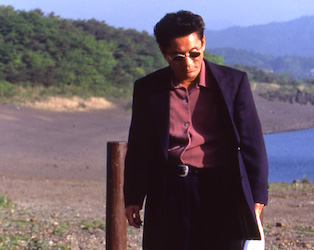 After gaining prominence in Japan as a TV comedian, Takeshi ‘Beat’ Kitano moved into filmmaking as director of titles such as Boiling Point (1990) and the superb Sonatine (1993), usually focusing on introspective tales of the Yakuza (the Japanese Mafia) that featured intermittent moments of humour and violence. While these films were initially indulged as a hobby at home, Kitano garnered increasing acclaim internationally, winning the Golden Lion at Venice for HANA-BI (‘fireworks’). Unemployed former cop Nishi (Kitano), caring for a terminally ill wife, and suffering guilt over a botched arrest that caused death and injury to his colleagues, must extricate himself from a debt to the Yakuza in a film that mixes moments of moving tenderness with unexpected violence.