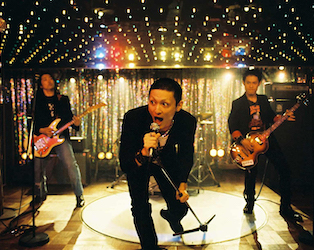 Director Yoshihiro Nakamura’s Fish Story is a heartwarming and brilliantly-devised film, full of surprises, that pulls its disparate threads together to furnish a moving and extremely satisfying climax. In the year 2012, the world faces destruction, mere hours away from a collision with an asteroid that will bring about the end of all life. A lone man wandering an evacuated Tokyo comes across a record shop whose owner reassures him that an obscure punk song will save the planet. This arresting start acts as the springboard for a series of episodes spanning the song’s four-decade history, from the original performers’ struggle to find an audience to the people in whose lives it plays a significant, and often strange, part.