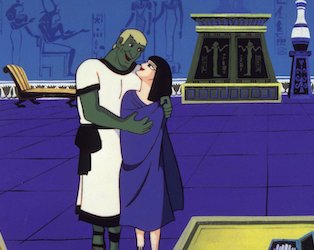 Intended for adults only, and featuring notably outdated portrayals of sexual politics, Cleopatra, which nevertheless offers much to afficionados of the genre, is here presented as a key work from one of the seminal figures in the development of contemporary manga and anime, Osamu Tezuka. His pioneering work with creations such as Astro Boy led to him being considered the ‘father of manga’, and his output was admired to the extent that Stanley Kubrick invited him to work as his art director on 2001: A Space Odyssey. In this, his first animated feature, a trio of time travellers from the distant future arrive at the court of Cleopatra and must contend with palace intrigues surrounding her relationship with Julius Caesar.