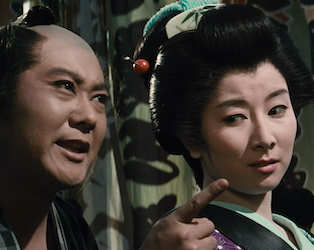 After making one of the great anti-war films, The Burmese Harp (1956, and remade by him in 1985), Kon Ichikawa released a number of big-budget films that, to their producers’ dismay, did not yield the hoped-for box office returns. As a result, he was tasked with remaking a 1936 film, which resulted in this lesser-known masterpiece. Rooted in the traditions of kabuki theatre and benshi narration, it is the tale of Yukinojô (Kazuo Hasegawa), adopted as a child by the manager of a theatre troupe after his parents had been driven to suicide by three corrupt but powerful men. On seeing them in an audience one night, Yukinojô, now an onnagata (a male performer of female roles), plans his vengeance.