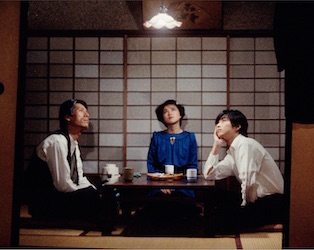 From the 1960s until the 1980s (and the advent of home video), one of the most popular genres in Japanese cinema was that of the pink film, which focused on the erotic, featuring copious amounts of nudity and sex, though strict limits enforced by the film ethics board ensured that the films never strayed into pornography. Their popularity gave them respectability, and mainstream directors such as Kiyoshi Kurosawa (Cure, 1997) and the Oscar-winning Yōjirō Takita (Departures, 2008) began their careers in the genre. This first feature from Nasayuki Suo (Shall We Dance?, 1996) is both homage to and pastiche of the films of Ozu, with a nod to Pasolini, in its tale of a family upended by a new arrival.