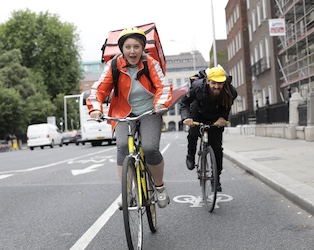 Mags, a hot-headed pizza delivery cyclist who reckons herself to be entirely self-sufficient, is just about getting by during the property crisis in Dublin. When her bike is stolen and she loses her job, her eviction seems inevitable. Mags determines to hunt down the thief who stole her bike and steal it right back. Part investigative thriller, part heist, and part magical-realist action comedy, the film includes an array of cameos from Alison Spittle, Tony Cantwell, Tara Flynn, Maeve Higgins and others. Conor O’Toole has created a refreshing picture of a financially vulnerable but physically fit and rightly angry young woman who ultimately learns the value of community action.

This film is also available to stream worldwide on IFI International here.