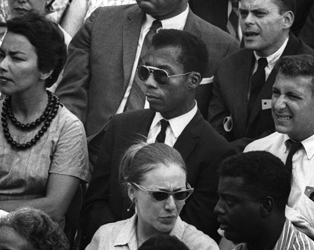 James Baldwin was a ground-breaking author, essayist and public intellectual who played a major role in articulating the complexity and toxicity of race relations in America during the Civil Rights movement of the 1960s.

In this riveting,Oscar-nominated documentary from Haitian filmmaker Raoul Peck, Baldwin’s own eloquent words, mostly from his unfinished manuscript Remember This House, are evocatively read by Samuel L. Jackson and fused, to powerful effect, with a range of archive footage including extracts of the deeply charismatic Baldwin on television, in conversation or debate, most memorably to an enraptured audience at The Cambridge Union in 1965.

While much of the film, like Baldwin’s book, focuses on the impact of the assassinations of Medgar Evers, Malcolm X and Martin Luther King, Jr. all within a devastating five year period, I Am Not Your Negro incorporates much else besides, adopting a nonlinear structure that appropriately dispenses with convention.