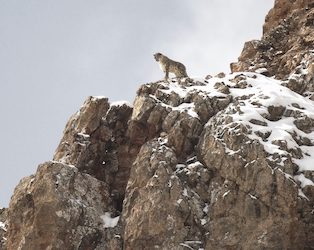 As part of the fifth Night of Ideas, the Irish Film Institute (IFI) in association with the French Embassy in Ireland, is delighted to present the Irish Premiere of The Velvet Queen (La Panthère des neiges), Marie Amiguet’s documentary which world premiered at the Cannes Film Festival in the Cinema for the Climate section, on Wednesday 26th January 2022 both at the IFI and online (IFI@Home).

High up on the Tibetan plateau, amongst unexplored and inaccessible valleys lies one of the last sanctuaries of the wild world, where rare and undiscovered fauna lives. Vincent Munier, one of the world’s most renowned wildlife photographers takes the adventurer and novelist Sylvain Tesson (In the Forest of Siberia) with him on his latest mission. For several weeks, they’ll explore these valleys searching for unique animals and try to spot the snow leopard, one of the rarest and most difficult big cats to approach.

The Night of Ideas is a worldwide initiative spearheaded by Institut Français celebrating the stream of ideas between countries, cultures and generations.