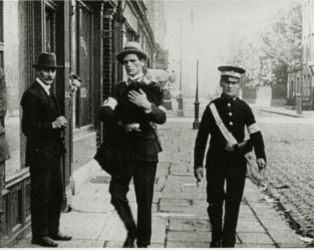 On the centenary of events portrayed, we present George Morrison’s powerful sequel to Mise Éire (1959). Saoirse? is a much darker film than its triumphalist predecessor, depicting events from 1919 – 1922: the brutality of the War of Independence; the signing of The Treaty, and the ensuing disunity which culminated in a bitter Civil War.

Drawing on photographic and newspaper materials, incorporating Seán Ó Riada’s magnificent score and Seán MacRéamoin’s illuminating Irish script, director George Morrison (now in his 100th year) salvaged fragile nitrate film material (which might otherwise have perished) to create a dynamic moving image portrait of pre-Independence Ireland.  For the first time Irish cinema-goers were to witness a compelling filmic narrative of Irish history that many knew but few had ever seen. The film was produced by Gael Linn.

Saoirse? has been restored with the generous support of the Heritage Council – Community Heritage Grant Scheme 2022.