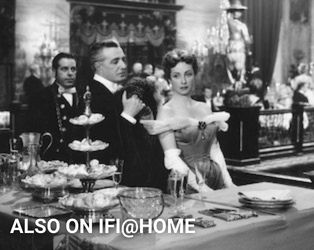 Madame de…, Ophüls’s romantic masterpiece, was his third French-made film after he returned from Hollywood in 1950. An adaptation of Louise de Vilmorin’s 1951 novel, it stars Darrieux as the unforgettably beautiful and frivolous Madame Louise de…. In order to pay a gambling debt, she discreetly sells a pair of earrings, a present from her husband General André (Charles Boyer). Telling him she has lost them sinks her into a spiral of lies, and her inexorable fall. Secrecy and deception are echoed by Ophüls’s dazzling, masterful camera movements with extended tracking shots, and long takes. Darrieux’s poignant and timeless romantic portrayal of Madame de… is magnificent, offering a complex and subtle range of emotions and instincts. MPR

Listen to the IFI Podcast on this year’s Danielle Darrieux retrospective here.