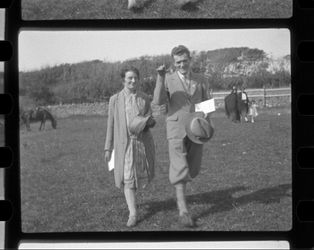 In 1925–1926, American naturalist Benjamin T. Gault visited west Kerry and Cork, collecting and filming seabirds and other wildlife specimens. He also captured the people of Cork and Kerry going about their business, farming, church-going, and dancing in the streets. On his return home, he filed his footage away and it was never seen. A search, started by Mícheál Ó Mainnín of Ballyferriter who’d heard tales of Gault’s visit from his grandfather, led to the discovery and restoration of nineteen rolls of 35mm nitrate negatives at Chicago’s Academy of Sciences.

The films will be introduced by Kathy Rose O’Regan, Senior Film Restorer at the San Francisco Film Festival.

This restoration is a collaboration between the IFI Irish Film Archive, the San Francisco Silent Film Festival, and the Chicago Academy of Sciences.

Presented with the support of Charles (Chuck) Treser.

Tickets are on sale from diff.ie