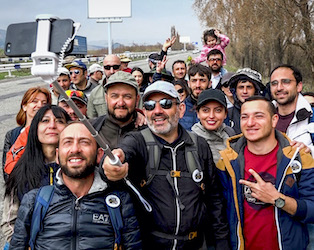 In 2018, journalist, politician and activist Nikol Pashinyan announced that he was beginning a walk across Armenia to inspire a velvet revolution and topple the corrupt regime that enjoys absolute power in the post-Soviet nation. With total access to all the key players, Garin Hovannisian’s gripping documentary follows Pashinyan’s efforts to prevent the election of the country’s president, Serzh Sargsyan, as the new prime minister, a move that would make Sargsyan a de facto dictator. Within a few weeks, the country erupts in a spectacular revolution, as millions take to the streets to stage some of the most creative, powerful, and surprising acts of civil disobedience in modern history.