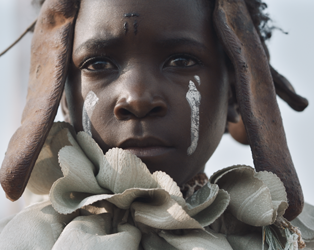 This film was released on Friday 20th October 2017 and is no longer screening.

Welsh-Zambian director Rungano Nyoni casts a baleful eye over the status of women in Zambian society in her satirical début feature that screened to acclaim in the Director’s Fortnight sidebar at this year’s Cannes Film Festival.
Nine-year-old Shula (Maggie Mulubwa) has been accused of witchcraft by the superstitious elders of her village.

Cast out, she falls into the care of Mr Banda (Henry B.J. Phiri), a venal public official who sees an opportunity to make a fortune from the girl’s supposed gifts. Housed in a makeshift witchcamp, Shula is tasked with absurd duties such as summoning rain to the arid region. Nyoni’s film is playful yet pointed in its critiques, with nods to magic realism in its visual metaphors, such as the length of white ribbon tied to the waist, that tethers the alleged witches to the earth lest they fly away.

Join us for our IFI Film Club discussion following the 18.15 screening on Monday 23rd.