Fahrije’s (Yllka Gashi) husband has been missing since the war in Kosovo, and along with their grief, her family is struggling financially. In the absence of her husband, whose fate is uncertain, Fahrije has become everything to her father-in-law Haxhi (Cun Lajci) and her two children, from homemaker to comforter. To provide for them, Fahije hopes to start a small business selling the roasted red pepper relish ajvar to city supermarkets, but in the traditional patriarchal village where she lives, her ambition and efforts to empower herself and other women are met with resentment and suspicion. She struggles not only to keep her family afloat but also against a hostile community who are undermining her efforts and hoping for her failure. The cooperative’s tentative steps to defy convention and village gossip form the emotional heart of a remarkable true story. 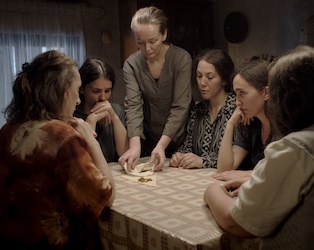