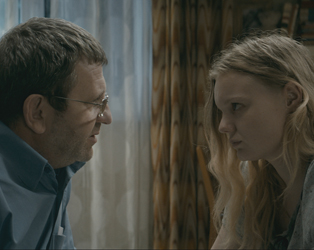 A father goes to extreme lengths to ensure his daughter’s academic success in Cristian Mungiu’s (4 Months, 3 Weeks and 2 Days, Beyond the Hills) excoriating delineation of corruption and moral compromise in modern Romania.

Dr Romeo Aldea (Adrian Titieni) lives an unremarkable life in a humdrum provincial town. His daughter, Eliza (Maria-Victoria Dragus), is offered a scholarship from a British university but doubt is cast over her future when she is assaulted and deemed unable to sit the final exam. Determined to safeguard her life beyond Romania, Dr Aldea must enter into a queasy alliance with police and education officials. Graduation is rigorous and unflinching in its depiction of a man’s moral downward spiral. Mungiu favours long takes, a dour visual palette, static cameras and naturalistic performances, an approach that lends compelling authenticity to this pungent morality play.