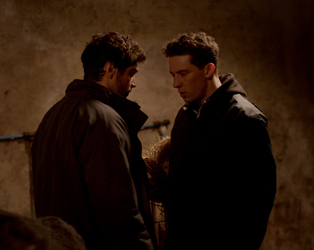 This film was released on Friday 1st September 2017 and is no longer screening.

There  were Open Captioned screenings of God’s Own Country on Wednesday 6th at 18.30 and Thursday 7th at 14.00.

An emotionally numb Yorkshire sheep farmer experiences an unexpected thaw when he is forced to work with a Romanian immigrant in Francis Lee’s extraordinary debut feature. Young Johnny Saxby (Josh O’Connor) suppresses his homosexual feelings through remote behaviour and binge drinking, and has become brittle and withdrawn as a consequence. When his equally taciturn father Martin (Ian Hart) has a debilitating stroke, Johnny has to shoulder the burden of the farm.

As lambing season approaches, Martin hires labourer Gheorghe (Alec Secareanu), whom Johnny treats with a mixture of disdain and outright hostility, until an extended sojourn together tending to the lambs leads to an undeniable attraction.