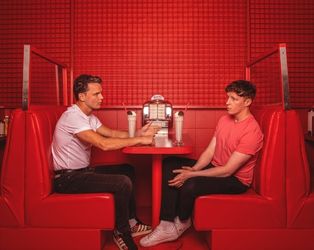 This groundbreaking film takes on the enormity and complexity of HIV in Ireland with rigorous honesty, ingenuity and artistry that propels the conversation forward.

Mixing new documentary work and archival footage with verbatim theatre, lip sync and a non-linear film style, this is queer storytelling at its best. Veda’s embodiment of the Diceman, Thom McGinty, is surely one of the most iconic visions of queer Ireland yet captured on film.

This is the HIV film Ireland has been waiting for.

For lovers of… United In Anger, The Arbour

U equals U. Did you know that effective HIV treatment makes a person’s viral load undetectable and therefore HIV untransmittable? Which means HIV cannot be passed on to sexual partners. U equals U!

Join the fantastic team behind How To Tell A Secret, with HIV activists and friends, as we discuss the film and the crucial topics it raises.

Seán Hewitt performs a newly-filmed poetry commission for Derek Jarman against the backdrop of the recent Jarman show at Manchester Art Gallery.