Due to popular demand, following its Irish Premiere screening as part of GAZE Film Festival 2021, Firebird returns for an encore screening.

Cold War tensions are the chilliest part of this passionate romance, based on the true story of love in the Soviet Air Force. In Firebird, hunky pilots Sergey and Roman begin a clandestine love affair in a time when same-sex relations could result in five years hard labour, if you were lucky. Our heroes’ furtive longings spark during a performance of Stravinsky’s ballet that shares the title, but with the threat of war at any moment, it isn’t just the laws that try to keep Sergey and Roman apart.

Romantic melodrama, lavish sets and anchored by some great performances, Firebird is a gripping work of romantic cinema. Co-created by lead actor Tom Prior in the role of Sergey, Firebird’s passion is not only between its central characters, but evident in Prior and director Peter Rebane’s desire to bring this important story to the screen. 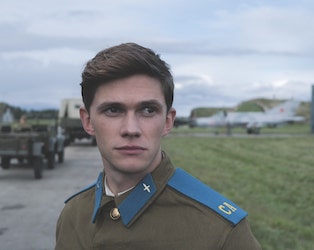