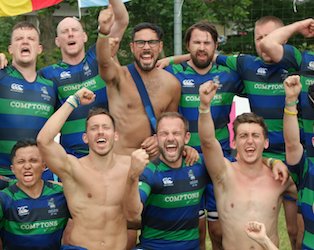 To pre-order Steelers, click here. The film will be available to view from Saturday, October 3rd at 13.00.

For a lot of LGBTQ+ people, growing up involves reclaiming things from which we once felt alienated. Right at the top of that list for many of us is sport. Or, to be more specific, team sports! For one group of mates having a drink in Central Station pub 25 years ago, their dream was to form a gay rugby team. And so, the Kings Cross Steelers were born.

Now with over 60 clubs worldwide, their little dream has grown into the Bingham Cup, the biggest tournament of its kind, which Dublin hosted in 2008. This life affirming documentary will charm even the most casual rugby fan, as we follow the beefy and boisterous boys competing in the 2018 cup. We also get to know Nic, their steely lesbian coach, and learn about her own story as a queer sportsperson. In these strange days when physical contact is a no-no, spare a thought for rugby players everywhere! Steelers is a story of friendship and community, and a must-see in trying times.

A Q1A with the director and film’s protagonists will follow the film.

Presented in partnership with Sporting Pride .