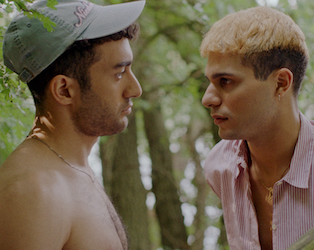 To pre-order No Hard Feelings, click here. The film will be available to view from Sunday, October 4th at 20.00.

Closing the 28th edition of GAZE is a film about youth, life and divided futures. No Hard Feelings is the exuberant, confident debut feature by German-Iranian director Faraz Shaiat and winner of the TEDDY Award at the Berlin Film Festival.

It tells the story of Parvis, a German-Iranian boy who is doing community service at a local centre for new refugees in Germany. Parvis is certain of himself: out, proud, stylish and sexual. At the centre, he meets two Iranian refugees, the brooding Amon and his assertive sister Banafshe. The three strike a connection, but Amon and his sister recognise that while Parvis speaks Farsi, his life and his future are profoundly different to their own. Matters get more complicated when an intense attraction builds between the two boys.

No Hard Feelings is a unique story of 21st-century immigration. It is also a story of the obstacles that impede so many from human dignity and the fundamental rights they deserve. Yet at its centre is a tale of queer joy, friendship, community, love and desire. In a year of so much discord, it speaks to the future, but one that remains unknown.

Presented in partnership with Goethe-Institut Irland.