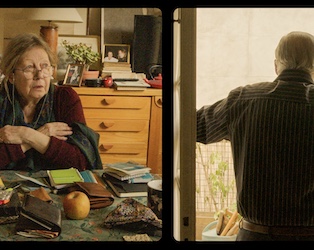 Gaspar Noé has, since his debut, I Stand Alone (1998), and its infamous successor, Irréversible (2002), been synonymous with confrontational, provocative, and formally audacious filmmaking, a veritable enfant terrible of French arthouse cinema. The most shocking aspect of his new film however, is the relative restraint the director displays in tackling the taboo subjects of old age, dementia, and death. The bracing Vortex, which exerts a steely grip, captures a brief period in the life of an elderly couple, Elle (Françoise Lebrun) and Lui (legendary horror director Dario Argento), whose idyllic life in a Parisian apartment is shattered when she begins to succumb to the effects of dementia. From this early point in the film, Noé employs a split-screen technique, with each character confined to their half of the frame, ingeniously keeping the couple together onscreen, yet ultimately apart.