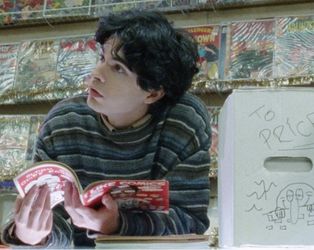 Robert (Daniel Zolghadri), an eighteen-year-old with aspirations to be a cartoonist, rejects the comforts of suburbia and strikes out to make his fortune as a comic book artist. Robert’s tentative friendship with the unhinged Wallace (Matthew Maher), whom he meets by chance and realises was once a colour assistant on renowned comics, becomes a quest to redeem this forgotten artist. Director Owen Kline, who came to attention as Jessie Eisenberg’s little brother in Noah Baumbach’s The Squid and the Whale, makes his directorial debut with this deliciously irreverent comedy, clearly inspired by legendary cartoonists Robert Crumb and Harvey Pekar.