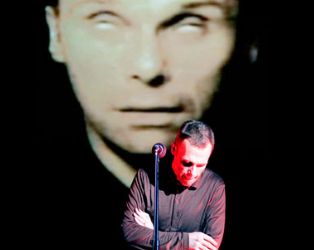 In May of this year, the celebrated singer-songwriter Cathal Coughlan passed away in his adopted city of London, having only recently produced some of his most exciting work with Song of Co-Aklan and Telefís.

Johnny Gogan’s innovative art documentary examines the life and work of the Cork-born enfant terrible. The film emerged from Coughlan’s 2005 musical theatre presentation Flannery’s Mounted Head which involved a musical and spoken word imagining of his home city of Cork’s “Madhouse by the Lee”. The show provides a centre-piece for an examination of Coughlan’s musical career, firstly with the band Microdisney, where he formed a powerful songwriting collaboration with Seán O’Hagan, and later with the volatile and uncompromising The Fatima Mansions and a no less prolific solo career, always pushing the boundaries of imagination and musical exploration.

The screening will be introduced by Johnny Gogan (director) and Gary Sheehan (producer).