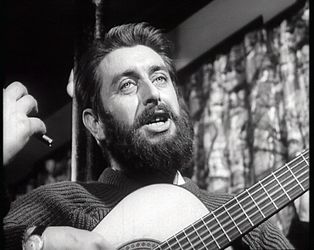 Ronnie Drew and his band of bohemian merrymakers, The Dubliners, re-enact the ballad ‘The Night That Larry Was Stretched’, along with young singer Johnny Moynihan. The film finds Drew caught in a hangman’s noose as just reward for being ‘the best burglar in all Ireland’. This mock opera, infused with gallows humour, captures the spirit of camaraderie among a certain set in 1960s Dublin – it’s all there in the Guinness, the music, the wit and the grit.

The film made in 1965 ran into financial difficulties before it was properly completed but after it had assumed cult status. Extraordinarily, it remained unseen until veteran filmmaker Tom Hayes brought the outtakes to Sé Merry Doyle, who oversaw its painstaking restoration in 1998.

The original 35mm elements of this film are preserved in the IFI Irish Film Archive. We are delighted to present the first public screening in many years of this remarkable oddity.

The film will be introduced by Restoration Producer, Sé Merry Doyle.