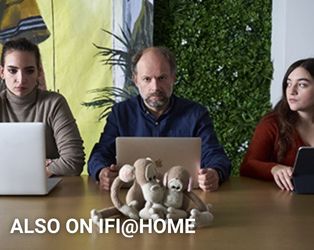 Alexandre (Denis Podalydès) is unemployed, and has two months to prove to his wife, who is on a top-secret nuclear submarine mission, that he can care for their children and be financially self-sufficient. The problem is that The Box, a greenwashed start-up who offers to hire him on a trial basis, has a strict no-child policy, meaning he must lie to Séverine (Sandrine Kiberlain), his formidable new boss. By chance he meets Arcimboldo (Bruno Podalydès), self-styled king of the gig economy, who offers to look after Alexandre’s kids in return for accommodation. A droll, insightful comedy for everyone who is overwhelmed by the modern world and new technologies. DOM

Director’s note: Playful and dreamy, Bruno Podalydès’s witty comedy spins us through situations like a merry-go-round through satire, slapstick, and absurdity.