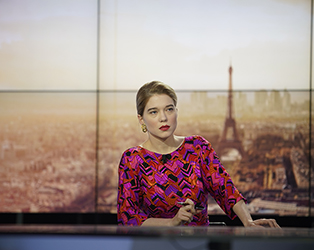 France de Meurs (Léa Seydoux) is an egocentric, fame-obsessed TV news anchor, whose stylised reporting from conflict zones and slick studio discussions have made her enormously popular. Her frenetic, glamorous life is derailed after a traffic accident where she injures a North African man with learning difficulties. In the aftermath, France attempts to step away from the limelight, but her fame, and a mysterious new romance, keep her in the public eye. The cinema of Bruno Dumont resists categorisation, moving between austere realism, offbeat musicals, and broad farce; France is another unpredictable turn, a satire of the media which flirts with the mainstream whilst retaining his uncompromising vision. DOM

Director’s note: This brilliant portrait digs deep beneath the layers of the news media, blurring lines between the ‘real world’ and our new digitised world.