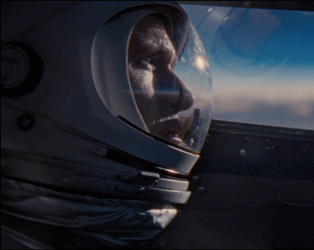 This film was released 12th October 2018, and is no longer screening.

Ryan Gosling is perfectly cast as Neil Armstrong in Damien Chazelle’s compelling biopic, ably conveying the astronaut’s professionalism and drive to achieve the ultimate goal of landing on the moon.

Beginning in 1961 with his recruitment to the Apollo space program, the film depicts the rigorous training and frequent setbacks of the initial years of the space race, when the US trailed the Soviets. As the mission draws closer, the cracks in his marriage to Janet (Claire Foy) begin to widen.

Chazelle wisely restricts his focus to Armstrong’s experience of events and as such, the action is often shot from his perspective making for a thrillingly immediate cinematic experience.