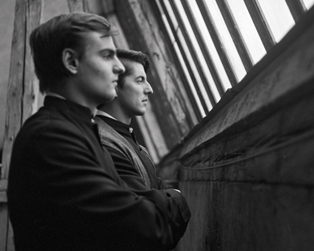 The year is 1980; Michal (Samuel Polakovic) and Juraj (Samuel Skyva) are students at a theological seminary in communist Czechoslovakia, at a time when the church is controlled by the state-sponsored Association of Catholic Clergy, whose purpose was to ensure that priests tow party line. Fearing the dissolution of their school, the tutors indoctrinate the young seminarians into the ideology of the communist party. The boys must choose between faith and politics, whether they collaborate with the regime, or risk being subjected to draconian surveillance by the secret police. With its focus on recent Eastern European history, and starkly beautiful monochrome imagery, presented in the square academy ratio, Servants is visually reminiscent of Pawel Pawlikowski’s Ida and Cold War, yet is more thematically aligned to cold war spy thrillers, the tense, elliptical editing, and foreboding music serving to heighten the growing sense of paranoia and oppression.