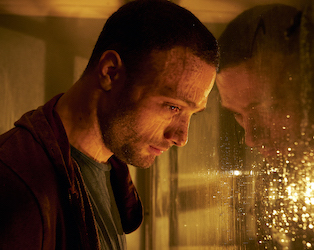 Set in an unremarkable Yorkshire coastal town, Nocturnal follows the story of Pete (Cosmo Jarvis), a disheveled and darkly compelling thirty-something who works as an occasional handyman at the local high school. There, he meets Laurie (Lauren Coe), an emotionally withdrawn student who has recently relocated to town with her mother (Sadie Frost). After a series of curt interactions, these two strangers form a precarious friendship built on their mutual connection as outsiders. As they spend more time together, their unique bond grows, unravelling the truth behind Pete’s motives. Rife with simmering emotional tension, Nathalie Biancheri’s elegantly controlled character study boasts strong central performances from Jarvis and Coe, whose playful banter may conceal something more ominous.