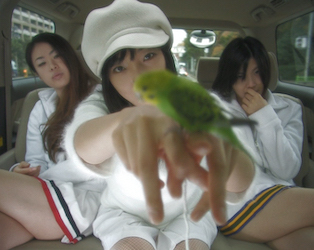 The Virgin Mary, upskirt photography, cross-dressing, cult religion and martial arts all in the same film? Welcome to the world of wonder that is Japanese writer-director Sion Sono’s madly majestic four-hour fresco of contemporary love and lust. Before high-school student Yu’s devoutly Christian mother succumbs to terminal illness she encourages her son to find his own ‘Maria’, whereupon his widowed father takes up the priesthood and encourages his son to confess his sins. Worried that he’s not really sinning enough, Yu falls in with a band of panty-fetishists using kung-fu techniques to grab clandestine photos at which point he meets schoolgirl Yoko. Drawing on the influence of Japanese manga comics, Sono’s film is farcical, raunchy, madcap and deeply serious. Reflecting on how religions tend to turn sexual feelings into shame, it confronts a fundamental issue for our times: in a world of pornographic exploitation and seemingly ubiquitous sexual abuse, can male heterosexual longing ever again be considered pure? Or is love just a dirty word these days? A cinematic legend in the making.