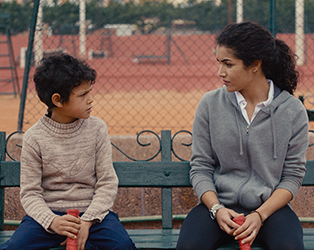 The power of sport to transform lives is at the heart of this warm family tale of 10-year-old Mica who lives in a slum area on the outskirts of Meknes, Morocco. His parents hope for a better future for him and when he gets a chance of an apprenticeship at an exclusive Casablanca tennis club, he grabs it. Stepping into this wealthy environment, Mica encounters owner Mr Slimani who has his own dreams of his son Omar becoming a tennis champ. Omar has neither talent nor interest, and the French coach Sophie soon spots Mica and takes him under her wing.
French-Moroccan director Ismael Farrouki won acclaim with his first feature, Le Grand Voyage. Here he brings his own Moroccan background to this heartfelt drama, while achieving wonderful performances from the young actors, particularly Zakaria Inan as Mica, a boy determined to change his destiny through sport. AMG