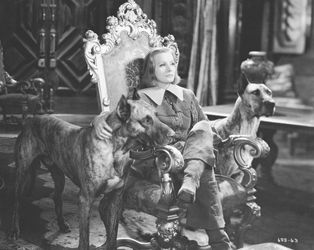 One of Garbo’s quintessential roles in one of her finest films captures her graceful allure and enigmatic persona. The idea for the film came from Austro-Hungarian born émigré Salka Viertel who had become close friend and confidante to Garbo. Viertel’s creative influence in this period cannot be underestimated both through her background in European stagecraft, and her wide network of European émigré and intellectual friends. Originally planned to be made in Europe, which would have taken Garbo back to her roots, the film was finally shot in Hollywood. Queen Christina is one of the era’s most sophisticated examinations of gender and identity, with Garbo perfect as the bisexual Swedish monarch who was raised from birth as a boy.