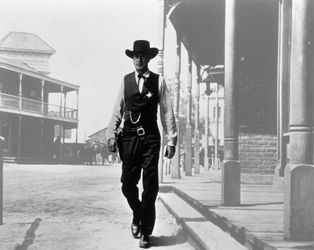 A town marshal, despite protests from his new bride and the townspeople around him, must face a gang of deadly killers alone when the gang leader, an outlaw he sent to jail years ago, arrives on the noon train. High Noon, like Casablanca, is accepted as one of the quintessential classic American films, whose title has gone into the lexicon when Americans reference a tough decision. Its hero’s dilemma is the very epitome of the Western genre where ‘a man’s got to do what a man’s got to do’. However, against the background of the turmoil of America’s communist witch-hunt – when the Government’s House Un-American Committee was trying to weed out ‘reds-under-the-bed’, High Noon reflected a more contemporary complex personal dilemma.

This 4K restoration is courtesy of Park Circus.