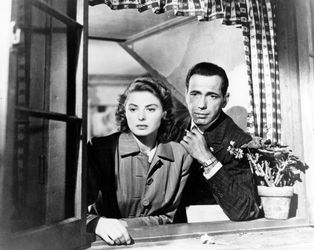 Casablanca has become quintessential Hollywood, lovingly remembered for the Bogart-Bergman-Henreid romantic triangle at its emotional heart. Yet it is also arguably one of Hollywood’s most political films, overseen by Hungarian-American director Michael Curtiz, who personally convinced Warner Brothers to cast recent European refugees and exiled actors, and engaging head on with the impact of Nazism on Europe and contributing to the mounting pressure in a reluctant America to get involved in WWII. It is also an extraordinarily European film in depicting the exhausting and desperate flight from fascism. Many members of the cast and crew had had recent experiences of that desperate escape, and when filming the flashback scenes of Rick and Ilsa in Paris, broke into tears.