A superb adaptation of J.G. Ballard’s semiautobiographical novel (scripted by Tom Stoppard) about an English boy in Shanghai who becomes separated from his parents in the chaos following Pearl Harbor. “It’s about a very cruel death of innocence”, said Spielberg, as we witness the child’s transformation from pampered schoolboy to begrimed and sometimes deranged survivor in an internment camp. Ballard thought the performance of young Christian Bale the best by a child he had ever seen, and Bale is finely supported by an excellent cast in which John Malkovich excels as an unscrupulous American prisoner who teaches the boy the ways of the world. Spielberg’s predictably fabulous visual craftsmanship (with suggestive recurrent imagery of flames, windows and veils) holds together a sprawling narrative, but the film also marks a movement for him into a new terrain of moral ambivalence, emotional complexity and war-induced brutality. This is arguably his greatest film to date and certainly his most underrated. (Notes by Neil Sinyard.)

Audiences intending to see Empire of The Sun are encouraged to attend our FREE talk on Steven Spielberg’s legacy, by author and academic Niel Sinyard, at 15.10. Please call the IFI Box Office on 01 679 3477 to book. 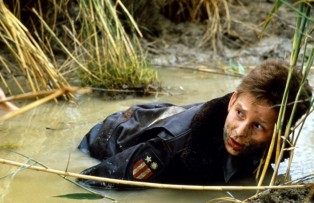