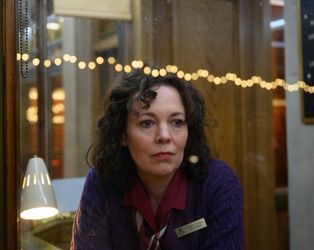 The year is 1981: Hilary (Olivia Colman) is a manager at the Empire cinema, a beautiful, if fading, Art Deco picture palace on the Margate coast, managed by the pompous Mr Ellis (Colin Firth), with whom she is having a toxic, clandestine sexual relationship. A glimmer of light enters her unhappy life in the unlikely figure of new usher Stephen (Michael Ward), a handsome young Black man who awakens a long repressed passion in this lonesome, single, middle-aged woman, whom we learn has recently spent time in a psychiatric facility for recurring depression. They bond immediately, but their burgeoning relationship is challenged by Hilary’s unstable mental health and the rampant racism Stephen is forced to endure on the streets of ‘80s Britain. The two must face the reality that, like the Empire cinema, their relationship cannot last forever.

The screening on Monday 9th (18.20) will be introduced by Maria Fleming of First Fortnight.

The cinema listings and screening times on this event page are for Empire of Light on 35mm. To book tickets for one of the Digital screenings, see here.