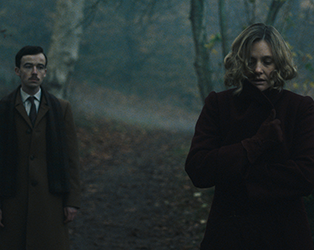 This hypnotic adaptation of Brian Catling’s Earwig is set in a desolate, motionless world, a sort of abstract apartment somewhere in mid-20th century Europe. Solitary Albert Scellinc is employed to look after Mia, a girl with teeth of ice. Each day Albert must change Mia’s dentures and serve her meals. He is also, mysteriously, looking after a cabinet of glasses. He spies on Mia in her bedroom, listening in by holding a glass up to the wall. We follow events from Albert’s perspective, distorted by his dreams and his past. Tension, and strangeness build through sonic texture, long fixed shots, low light, distorted images, and extreme close-ups – a gothic fairy tale, a dream, a nightmare(!) told through Hadžihalilović’s distinctive lyrical cinematic language. MPR

Director’s note: Following in the vein of Innocence and Evolution, Hadžihalilović’s gothic Earwig is a suspense-filled, beautiful visual horror – eerie and atmospheric!