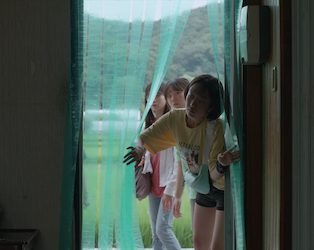 Yeon-woo, Song-hee, So-jung and Si-yeon are four middle school girls members of their school’s photography club. Their teacher gives them a project for the Summer holiday – to take pictures of ‘the end of the world’. But instead of using their smartphone cameras, he hands to each of them an old fashioned Kodak disposable film camera, saying ‘Take these film cameras and photograph the end of the world. You can go out together if you want. I hope you have a fun and meaningful Summer.’

Young Korean writers-directors Kwon Min-pyo and Seo Hansol make a delightful and poetic first feature. An unusual journey by rail finds the young girls in unfamiliar rural territory as their little expedition becomes a bigger adventure, revealing a new world, where they bond and share a coming of age. Is the end of the world, as one of the girls suggests, at the very last station of the Seoul Metropolitan Railway line? Simply lovely, timeless and universal.